This Thanksgiving, I am in charge of the Ham. I wanted something different. No pineapple either. I went with the Man who taught me how to make a tender moist turkey which received all around raves. After all, he has yet to let me down. Alton Brown has a recipe for City ham which is a bourbon glaze as well as gingersnap crust. I am omitting the gingersnap crust being I am not a fan of gingersnaps and in the reviews it is mentioned it becomes soggy on leftovers.
A late night trip to the liquor store had me toting home a small bottle of Wild Turkey 101 bourbon{that's 101 proof} for spraying down the ham. Not bad tasting in it's raw form and if you go beyond a little "taste", this recipe calls for 6 hours oven time. More then enough for a little mid day nap. 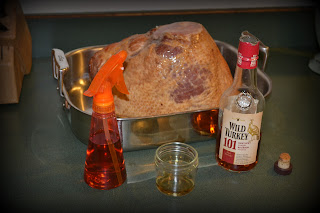 Alton Brown City Ham Recipe link
I am also whipping up some airy yeast rolls to take over for the dinner. Have you noticed out of all things made for Thanksgiving, the rolls are the most overlooked in the kitchen? I understand it can be hard fitting in the from scratch making & baking with so much more going on in the oven. But dismiss those store bought tasteless "things" and have these yeast rolls ready and waiting so as the turkey is "resting" fresh from the oven, you can pop in the rolls which take just 10-15 minutes for baking. Here's an easy & rather tasty when you add a splash of herbs to it's making, recipe.
Parker House Rolls recipe link.
As for my Potters shed, I have yet to finish it. Our weather has not been kind in cooperation.
I still have some touching up & adding to do before the painting {if it ever dries up enough so it will stick}. I am not a carpenter and being I used an already built frame {the 4 tier pallet}, not everything is exact upon close inspection.
One MAJOR flaw & downside to re purposing wood is that nothing is straight. There are "cracks between almost every piece applied.
Keep in mind, you are viewing something in the middle of it's process. I still have some roofing to do and a door to hang after I finish up the window areas.
One of the 6 pane windows After screwing in the hinges: 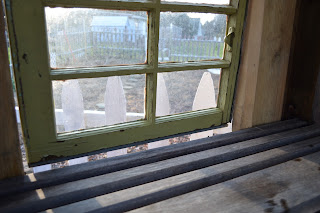 Under the window is a potting shelf I put in on one side, which came from some extra pieces I grabbed with those Display tables I had re purposed & gifted Mr.J .
Remember those Privacy fence sections I picked up last year? After making them into my garden picket fence, I still had one left over. I removed the slats & re purposed them into the back wall of the potter shed and to flank the front door- which is that newer pallet wood slat thing towards the bottom. It is laying on it's side until I get the hinges in place.
Can you see what I mentioned about the downside of re purposed wood? Notice the "cracks" between the fence slats? Just another thing I will have to brainstorm on disguising. 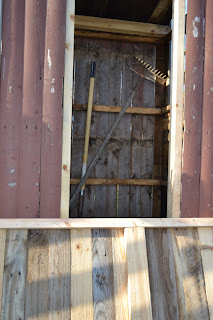 Well it's not like anyone will see it with all this land surrounding us... And your not gonna judge me on my "Bag lady outhouse" potter shed, now are you? No, I didn't think so. Your better then that and exactly why I do not mind sharing a little sneak peek despite it's rather rough & tumble beginnings.
I hope each of you have a most wonderful Happy Thanksgiving.
Be thankful for what you do have and no matter what, remember, there is always someone else who has less or worse. We each must make a conscious effort to stay positive in order to prevent the negative from taking over. It can be rather trying at times but it will help you get through and help those around you stay focused on what matters most.
Sweet Dreams,
~Tammie

Have a great Thanksgiving. I love Alton Brown. He rarely disappoints.

Hey Tammie...
I think that things are looking great! Won't be long and you'll be in business!

That ham is going to be a hit, I'll bet!

Have a great day!

Sounds ike a fun project. Like the idea of ham.

Love the shed. I use leftover pieces of anything to make coops and shelters. Because straight and level is overrated and the animals never complain :)
Stevie @ ruffledfeathersandspilledmilk.com

Where I hop around...

Please do not use photos or other content without adding a direct link back to this site.

My Tutorials and Video segments